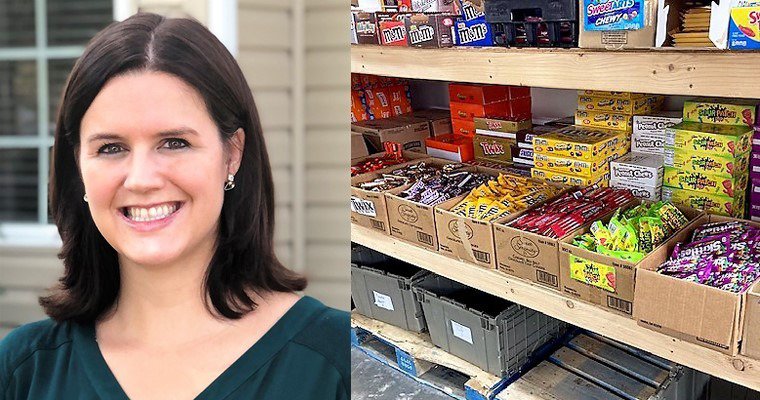 While technology proved beneficial when Daniels Vending first deployed it several years ago, the investments proved especially helpful in surviving the coronavirus pandemic.

Megan O’Neil believes technology made it possible for Daniels Vending LLC to survive the pandemic.
Sept. 22, 2021 | by Elliot Maras
When Daniels Vending LLC, an independent operation in Trappe, Maryland, invested in technology several years ago, the goal was to improve route accountability.
Introducing telemetry to its vending machines and pre-kitting in its warehouse improved efficiency and profitability, sure enough. But the investments proved even more significant when the coronavirus pandemic forced customer locations to close, said Megan O’Neil, general manager.
“I don’t think we could have gotten through all of this not having the systems that we have in place,” O’Neil told Vending Times in a phone interview. “I think it would have been an even bigger challenge than it already was.”
“It allowed me personally to work remotely, which was a huge factor,” she said.
Location closures chopped sales to 30% of the company’s normal activity, O’Neil said. Management had no choice but to reduce expenses.
The need to consolidate routes on account of the pandemic wasn’t as problematic as it might have been since one of the four route drivers left slightly before the pandemic hit.
“With everything shutting down we made the decision not to replace that route,” O’Neil said.
To offset revenue losses, the company offered snack boxes to some locations in addition to applying for and receiving a PPP loan.
“When businesses weren’t allowing people in, we were giving them an option of selling them boxes of products that we would prepare and drop off,” she said. Companies would purchase the boxes and place them in their break areas for employees.
“Those were a mix of various snacks people could buy either for their office or their home,” O’Neil said.
The company also added a pantry service business that it services on a vending route.
The company initially invested in technology to improve route accountability.
After installing Cantaloupe telemetry in most of its machines and deploying pre-kitting in the warehouse, the company experienced a 30% increase in sales per route and a 10% increase in fills per location visit.
The technology eliminated shrinkage and nearly eliminated product spoilage, translating into a 2% profit gain.
The company also uses the LightSpeed Automation mobile solution to pre-kit routes in the warehouse.
“They (the warehouse pickers) can pick much more efficiently that way,” O’Neil said.
Dynamic route scheduling was also helpful since the company serves a largely rural area with extensive distances between route stops.
This technology was especially helpful during the pandemic when locations closed or reduced work forces.
One downside of the telemetry during the pandemic O’Neil noted was having to pay the monthly service fees for machines in closed locations.
“Cantaloupe did have some options that helped with that when things were fully shut down,” she said.
Business gradually improved as customer locations reopened. For most of 2021 the company has operated at 60% of normal activity and is currently close to 100%, O’Neil said.
“Cantaloupe has been a big help to us…just to see what machines were actually selling things,” she said.
The only machines not equipped with telemetry are the Rubi coffee machines, the only coffee machines the company uses. The company believes the Rubi machines provide a better quality coffee than other coffee vending machines.
The company only operates a small number of coffee machines and refrigerated food machines, and no frozen machines.
Mobile payment is increasing, O’Neil said, especially on college campuses, but remains a minority of the cashless sales. Close to 90% of the machines have cashless readers.
This year, the company launched its first dedicated micro market route for its three micro market locations managed by a part-time driver.
“He comes in two days a week and handles that separately, and we found that’s working really well,” O’Neil said.
“It was something we were trying to figure out a solution for prior to the pandemic just because it (the micro markets) was a lot for the driver to handle with vending stops and the markets,” she said. “As we were consolidating the routes and figuring out how to make things the most efficient, that was one area we saw that could work better.”
The company’s recently restored fourth route consists of a four-days-per-week vending route and two-days-per-week micro market route.
While sales have mostly recovered to pre-pandemic levels, inventory availability continues to be a problem.
“That’s the one challenge I would say with having everything linked to telemetry and having planograms and all that good stuff…when you’re out of something it’s hard to make a switch easily when you can’t get product. That’s been a weekly challenge we’ve been facing.
“Right now I’m having a very hard time getting Gatorade from anyone,” she said.
With schools reopening in the fall, she anticipates growth.
The company has 10 employees and belongs to the Sodexo buying group.
For an update on how the coronavirus pandemic is affecting convenience services, click here.
Photos courtesy of Daniels Vending LLC.

Sign up now for the Vending Times newsletter and get the top stories delivered straight to your inbox.


or register now
Forgot your password?
You may sign into this site using your login credentials
from any of these Networld Media Group sites: