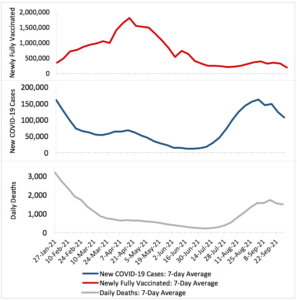 Serving economic news and views every morning.
Analysis on the underemployment number in the monthly jobs report.
At least one search term must be present.
At least one search term must be present.
Weekly Checkup
October 1, 2021
Christopher Holt
It is increasingly clear that Democrats will have to pare back the $3.5 trillion topline reconciliation figure to clear the Senate. It’s less clear how much that dollar figure needs to fall, but according to press reports, the battle of priorities has already begun as various constituencies try to keep their pet programs from getting the axe. One point of contention has been whether to prioritize expanding Medicare to cover vision, dental, and hearing services, or extending Medicaid coverage to lower-income Americans residing in red states that haven’t expanded Medicaid under the Affordable Care Act. But as it happens, Medicare beneficiaries can already receive vision, dental, and hearing coverage through the program if they want it.
Medicare Advantage (MA) allows beneficiaries to enroll in plans managed by private insurers, as opposed to partaking in the traditional fee-for-service (FFS) Medicare program. MA plans combine all Medicare Part A and Part B services, and 89 percent of plans also include Part D coverage (MA-PD plans). While MA plans typically charge beneficiaries a premium in addition to the standard Part B premium, the average MA premium is $21 a month. Additionally, many beneficiaries have access to MA plans with zero-dollar premiums; for example, 60 percent of enrollees in MA-PD plans paid no premium in 2020. But the real benefit to MA plans is that they’re able to offer more than FFS. Starting in 2017, MA plans began offering “primarily health-related” benefits such as—wait for it—vision, dental, and hearing. In 2019, plans were allowed to expand those supplemental benefits to cover things such as transportation, meal service, and adult day care, as well as disease-tailored benefits to enrollees with specific medical conditions. Beginning in 2020, plans started offering “non-primarily health-related” benefits—for example, pest control services and air purifiers—for enrollees with chronic diseases.
As of March of this year, 42 percent of all Medicare beneficiaries were enrolled in an MA plan, and that number is projected to increase to 51 percent by 2030. Interestingly, racial minorities make up a larger share of the MA population (32 percent) than they do of the FFS population (21 percent). As of this month, 90 percent of the 27.1 million Medicare beneficiaries enrolled in MA plans are in MA-PD plans. In 2020, 98 percent of MA-PD plans covered vision care, 93 percent provided hearing benefits, and 87 percent covered dental services. Additionally, 95 percent of MA-PD plans offered fitness benefits such as gym memberships, and 68 percent offered coverage for over-the-counter items such as sunscreen and first aid supplies. MA also fosters competition and provides beneficiaries with choices of coverage and benefits. The average MA enrollee chooses among 33 plans offered by 8 different issuers in their geographic area, and there is even some evidence that MA enrollment leads to better health outcomes: MA enrollees have 33 percent fewer emergency department visits and 23 percent fewer hospital visits than those in FFS Medicare.
If Democrats are really looking for pain-free ways to cut back on their $3.5 trillion spending spree, scraping the dental, vision, and hearing additions to Medicare would be a good place to start, because the benefits are already available through Medicare Advantage. Perhaps advocates for enhanced Medicare coverage should instead focus on bolstering MA, which already provides a range of tailored benefits to the Medicare population.

Jackson Hammond, Health Care Policy Analyst
From practitioners to policy wonks, Medicare’s Fee-For-Service (FFS) payment system has long drawn criticism from all aspects of the health care world for a host of reasons. The rural health space in particular has major gripes with a system that pays for volume – rural hospitals inherently have lower volumes of cases, and that means lower payments. But contrary to this narrative, one aspect of the FFS payment calculation seems to heavily disadvantage wealthier urban areas: the Hospital Wage Index (HWI), a geographic adjustment factor that accounts for cost differences by region for hospitals. I’ve explored this in a previous primer, and the chart below looks at the Medicare margins (meaning the percent of costs that Medicare payments cover) for short-term care hospitals in the United States, comparing the Medicare margins of hospitals in high-cost areas to the national average Medicare margin. As the data show, Medicare does not fully cover costs in any of the areas or nationally, with the Seattle and San Francisco metropolitan statistical area (MSA) having the worst margins at -27.7 percent and -41.2 percent, respectively. The San Francisco MSA margin is over four times the national average, but its HWI of 1.8251 is set at just under twice the national average of 1.000. High-cost MSAs have an average margin loss almost double the average for all MSAs, while the average high-cost MSA HWI is only 32% larger than the national average (1.3196 and 1.0000, respectively). It is possible that hospitals may overstate their costs, but that alone cannot explain margin deficits this large. As the primer above discusses, there are deep flaws in the geographic adjustment calculation, and this is only one of them.

Margaret Barnhorst, Health Care Policy Fellow
To track the progress in vaccinations, the Weekly Checkup will compile the most relevant statistics for the week, with the seven-day period ending on the Wednesday of each week.