Over the next year, education companies will consider how to capitalize on the work they did delivering tech-based products and services to school districts during the pandemic. For many, that could mean securing new venture capital to help them grow, a new analysis found.
An EdWeek Market Brief survey of more than 300 representatives of education companies finds that nearly half, 47 percent, are thinking about seeking venture capital to fuel growth in the next year.
The survey, conducted in May and June, asked respondents what financial steps they were considering taking in the next year, from a bank loan to a public offering, to selling their company to a private equity firm.
Another 29 percent of those surveyed say they are weighing acquiring other companies, and 38 percent say they’re entertaining the idea of selling their businesses to another company.
This data, captured in EdWeek Market Brief’s recently released 2021 State of the K-12 Industry report, speaks to the amount of funding pouring in to the K-12 market and investors’ confidence in the longevity of district’s investments in ed tech. 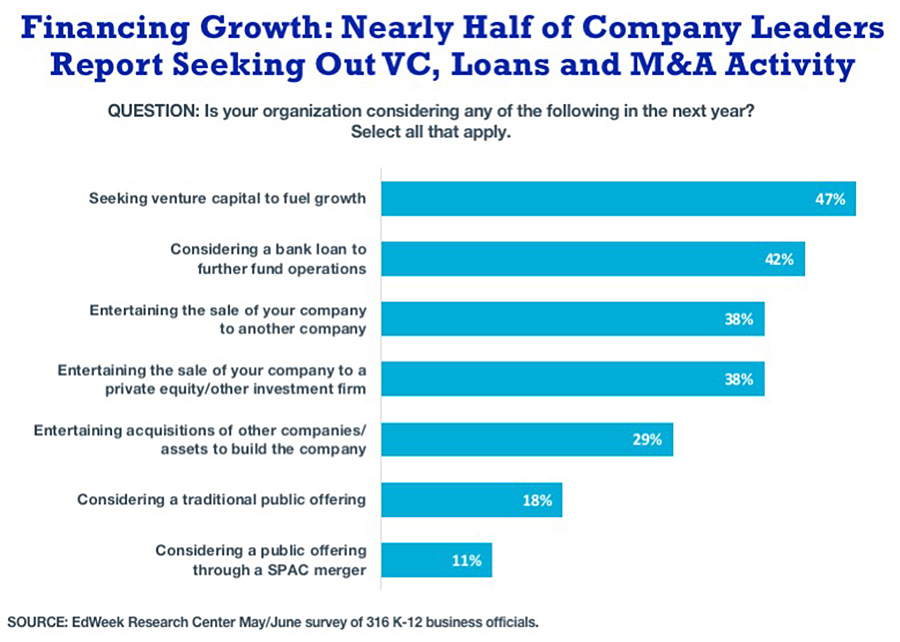 The overall report also reveals a much more optimistic attitude among executives compared to in 2020.
More than two-thirds of education companies predict their revenues will rise over the next year — a stark turnabout from last summer, when fewer than 20 percent made that prediction.
The pursuit of venture capitalist funding is “reflective of the strong underlying trends in the market,” said Lance Fenton, a partner at private equity firm Serent Capital.
The current ed-tech market follows a 20-year trend of increasing demand as K-12 schools increasingly digitized, said Fenton, who oversees the firm’s K-12 ed tech investments. And in the past year, COVID acted as an accelerator, revealing the technology schools lack and creating more urgency among them to fill the gaps.
The pandemic also gave some ed-tech companies the opportunity to prove their durability, Fenton said. In many cases, the tools and services they provided only become more valuable to schools when they pivoted to hybrid or remote learning.
“Investors are optimistic about the future of ed tech,” he said. “There’s a high perception of resiliency in the education market.”
The high investor appetite and correlated high valuations make it a good time to sell a company, Fenton said, so it isn’t surprising that nearly 40 percent of companies are considering it.
A recent analysis by investment banking firm Berkery Noyes found that the overall number of merger and acquisitions in the education industry rebounded to pre-pandemic levels in the first half of 2021. And the total value of those M&A transactions grew by more than 50 percent compared to the second half of 2020.
However, some of the market’s resiliency moving forward will depend on school districts’ ability to upgrade their infrastructure and continue to spend on technology, said Frank Bonsal, managing partner of Bonsal Capital.
That means the longevity of current investments depends to some degree on the amount of federal funding schools receive — which is currently at an all-time high due to COVID-era federal relief money.
“There remains a real need for hardware funding that will precede much of the needed tech-enabled solutions,” Bonsal said in an email.
Still, Bonsal said he’s also seen a greater risk tolerance among institutional investors in companies, especially among those looking to provide late-stage funding.
“There is abundant capital looking for investments in education,” he said. “But there is a gap in seed and late seed as institutional investors have moved downstream to later stages.”
For more information on how to access EdWeek Market Brief’s full State of the K-12 Industry, 2021, report, go here.
Follow EdWeek Market Brief on Twitter @EdMarketBrief or connect with us on LinkedIn.
See also:
K-12 Intel for Business Leaders
© 2021  Editorial Projects in Education, Inc.
6935 Arlington Road, Bethesda MD 20814 – 1-800-346-1834