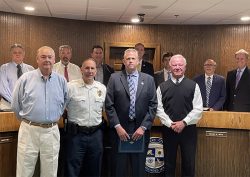 OCEAN CITY, MD – (October 5, 2021): After 26 years of dedicated service to the citizens of Ocean City, Lieutenant Brian Mongelli retired on September 30, 2021, from the Ocean City Police Department. Lt. Mongelli began his career with the OCPD as a seasonal police officer in 1992 before becoming a full-time police officer in May 1995.
During his career, Lt. Mongelli has served in multiple capacities. Lt. Mongelli has been assigned to patrol, criminal investigation division, and the services division. Lt. Mongelli was assigned to the Detective Sergeant of the Major Crimes Unit, Criminal Investigation Division from 2011-2015. In 2007, Lt. Mongelli received Officer of the Year for Neighborhood Watch of Ocean City, MD, Ocean City American Legion Post #166 and Ocean City Elk’s Lodge #2645. Lt. Mongelli was proficient in many specialized training fields. Lt. Mongelli was dedicated to his work and served the Ocean City community to his fullest extent.
After his retirement, Lt. Mongelli will begin his next career journey with the Worcester County Sheriff’s Office as a Sheriff’s Deputy. Most importantly, he is looking forward to spending more time with his family.
“I am truly grateful for the opportunity to have worked for the Town of Ocean City’s Police Department. It has been an honor serving and protecting the great citizens and visitors of Ocean City over these last 27 years.”
###