Crunchbase is the leading destination for millions of users to discover industry trends, investments, and news about global companies–from startups to the Fortune 1000.
The record funding pace continues into the third quarter of 2021 with $160 billion invested globally, matching the huge funding increase in the second quarter and up 78 percent year over year.
Subscribe to the Crunchbase Daily
Prior to 2021, global funding had not reached over $100 billion in a single quarter.
Funding in 2021 has far superseded that amount, with the first quarter tracking at $135 billion, the second quarter reaching $159 billion, and the most recent quarter peaking at $160 billion. 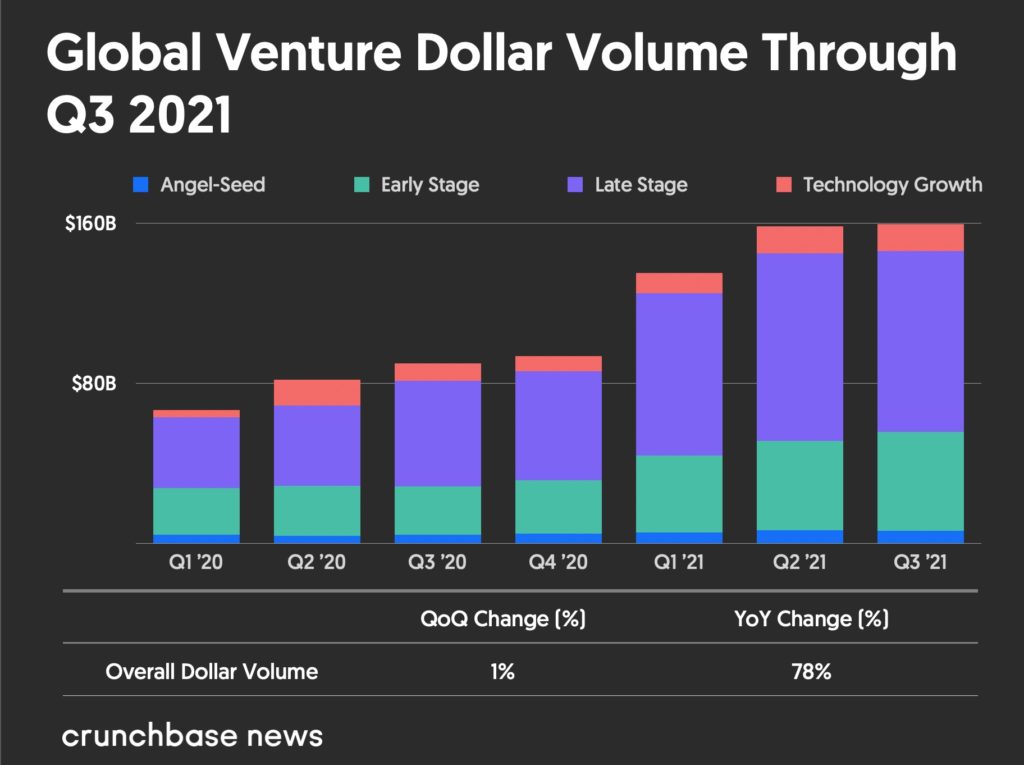 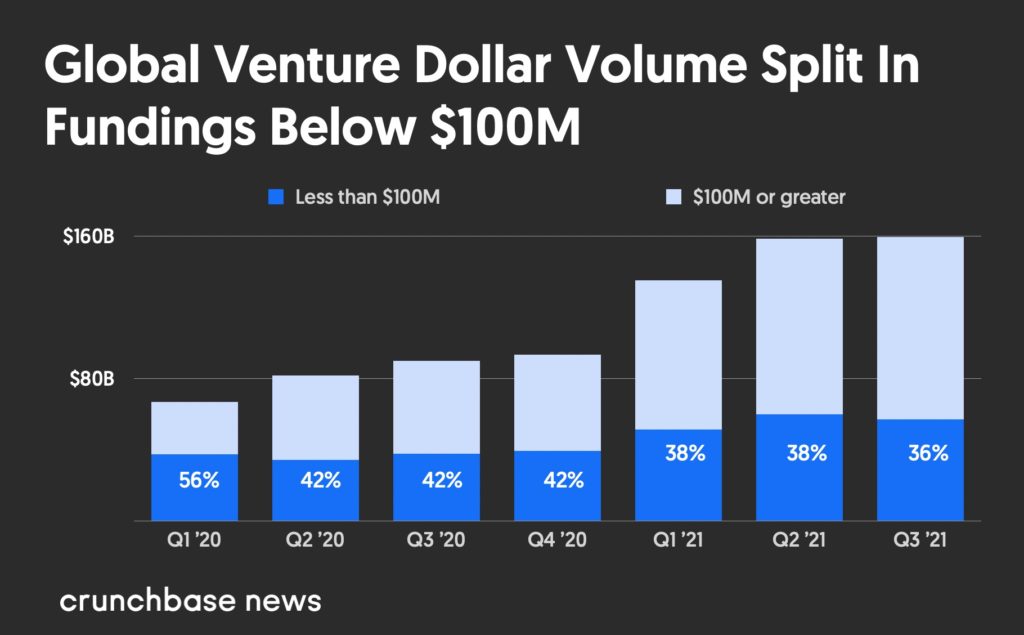 In this past quarter, 142 companies joined the Crunchbase Unicorn Board, compared to 145 in the second quarter. These past three quarters are up significantly over all prior quarters for new unicorn companies valued in a private financing above $1 billion for the first time with the board now listing over 1,000 companies, collectively valued north of $3.4 trillion. 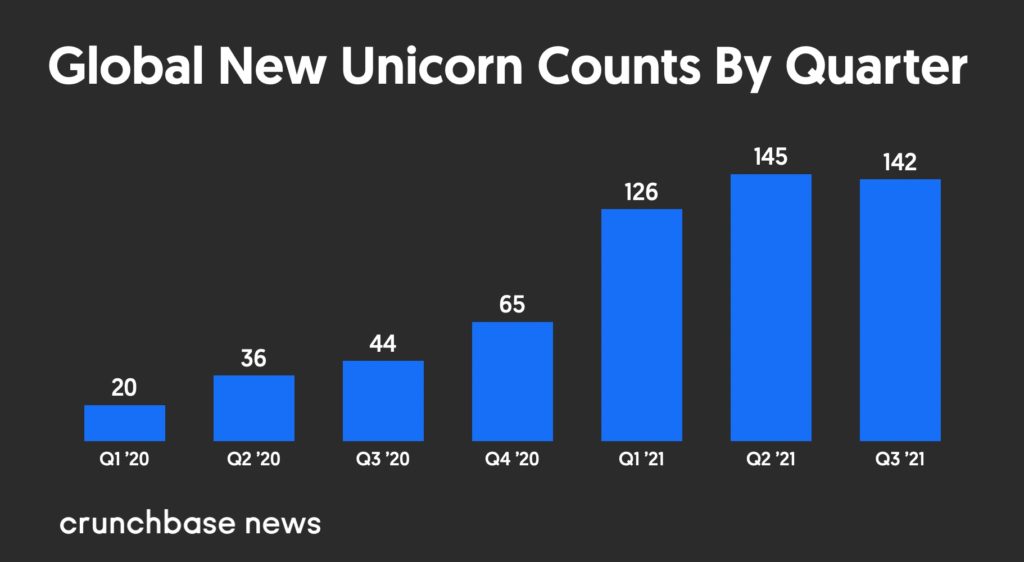 With this wide disparity in funding, let’s look at funding by stage.
Early-stage funding grew the most, up 104 percent year over year and 11 percent quarter over quarter, with over 1,900 companies raising at this stage globally.
Despite funding lags for the most recent quarter relative to past quarters, early-stage counts are up year over year by 19 percent. 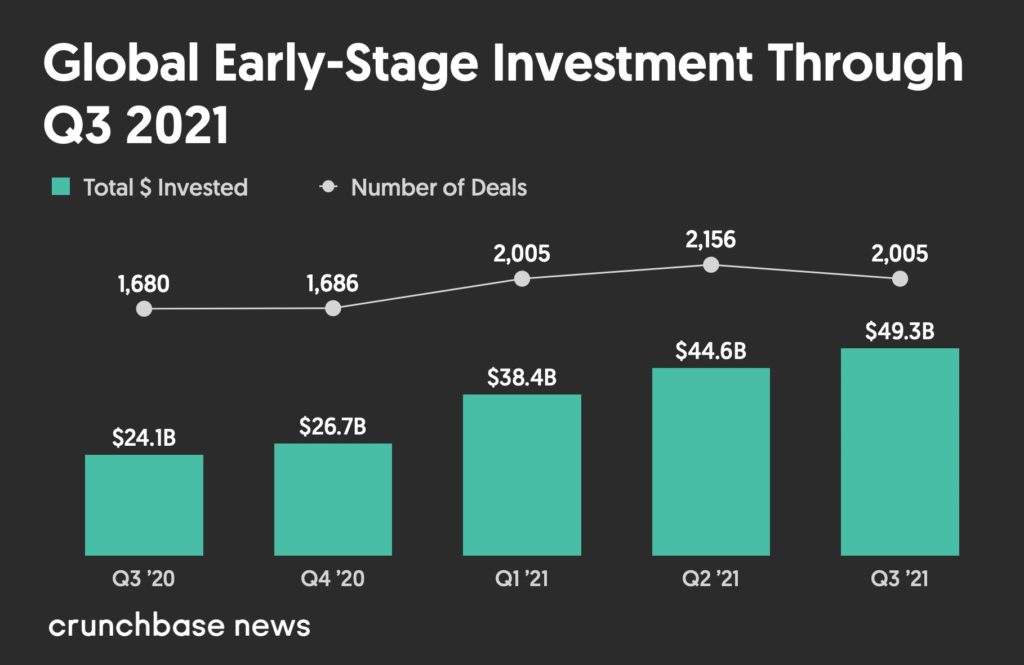 Late-stage funding is over $100 billion in the second and third quarters of 2021. Late-stage and technology growth funding dipped quarter over quarter, but is up significantly year over year by 69 percent.
Over 800 unique companies raised across 849 investments, which was also up year over year compared to just under 600 companies that raised in the third quarter of 2020. 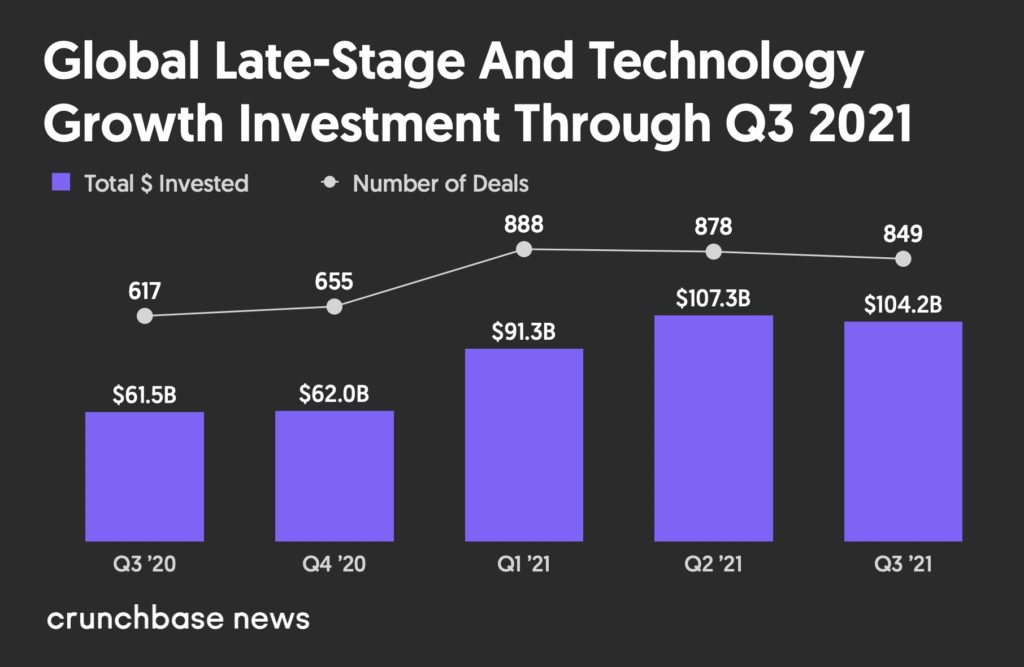 Seed-stage funding is up year over year by 47 percent and is down a little quarter over quarter.
Seed funding counts and amounts typically increase over time, as these deals are added to the Crunchbase dataset after the close of the quarter. 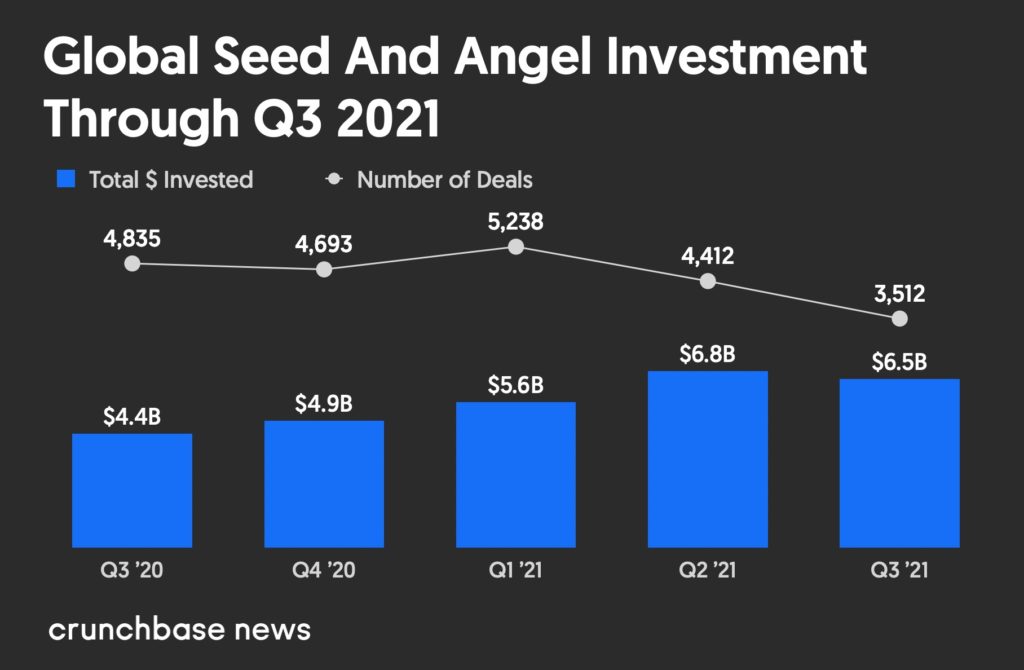 In 2021 to date, we find  26 venture-backed companies that debuted over $10 billion. This contrasts with 2020 where half that count, 13 companies, were valued over $10 billion at IPO.
The largest debut this past quarter was Robinhood. The company raised $1.9 billion and was valued at $32 billion at IPO.
Some of the largest venture-backed public debuts in the last quarter did not follow traditional IPO routes. Lucid Motors, Ginkgo Bioworks and Cazoo went public via  SPACs and Wise, Amplitude and Warby Parker via direct listings. 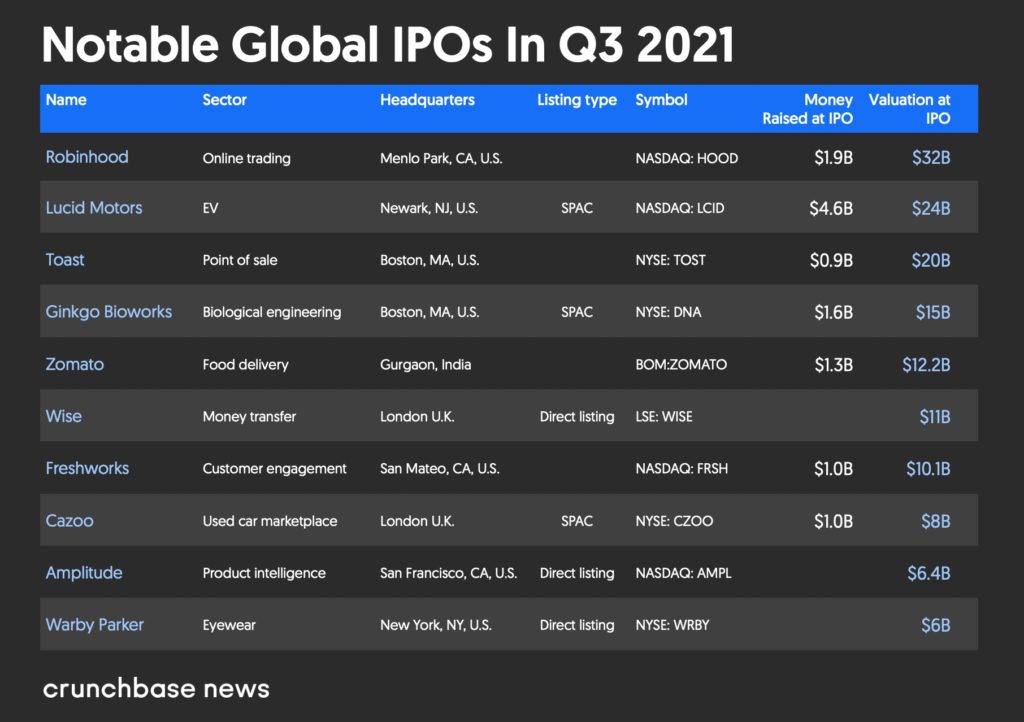 We are on track to hit a blockbuster funding year with $454 billion invested through the first three quarters of 2021. This contrasts with $332 billion invested globally in 2020 across all funding stages.
With many growth companies raising funding at an unprecedented pace, the IPO market is predicted to remain strong through the end of the year and into 2022.
Crunchbase Pro queries used for this analysis
The data contained in this report comes directly from Crunchbase, and is based on reported data. Data reported is as of Oct 5, 2021.
Note that data lags are most pronounced at the earliest stages of venture activity, with seed funding amounts increasing significantly after the end of a quarter/year.
The most recent quarter/year will increase over time relative to previous quarters. For funding counts, we notice a strong data lag, especially at the seed and early stages, by as much as 30 percent to 40 percent a year out.
Please note that all funding values are given in U.S. dollars unless otherwise noted. Crunchbase converts foreign currencies to U.S. dollars at the prevailing spot rate from the date funding rounds, acquisitions, IPOs and other financial events are reported. Even if those events were added to Crunchbase long after the event was announced, foreign currency transactions are converted at the historic spot price.
For M&A transaction analysis, we include venture-backed companies and exclude companies that previously went public.
Seed and angel consists of seed, pre-seed and angel rounds. Crunchbase also includes venture rounds of unknown series, equity crowdfunding and convertible notes at $3 million (USD or as-converted USD equivalent) or less.
Early stage consists of Series A and Series B rounds, as well as other round types. Crunchbase includes venture rounds of unknown series, corporate venture and other rounds above $3 million, and those less than or equal to $15 million.
Late stage consists of Series C, Series D, Series E and later-lettered venture rounds following the “Series [Letter]” naming convention. Also included are venture rounds of unknown series, corporate venture and other rounds above $15 million.
Technology growth is a private-equity round raised by a company that has previously raised a “venture” round. (So basically, any round from the previously defined stages.)
Illustration: Dom Guzman
Stay up to date with recent funding rounds, acquisitions, and more with the Crunchbase Daily.
Regulators are increasingly circling crypto, leading the sector’s biggest players to take steps to reign in policies that represent a more extreme…
North American venture capital investment held up at near-record-setting levels in the third quarter, as both early- and late-stage dealmaking…
Investors seem to be looking for new ways to invest—and platforms offering ways to buy into private companies seem to be having their moment.