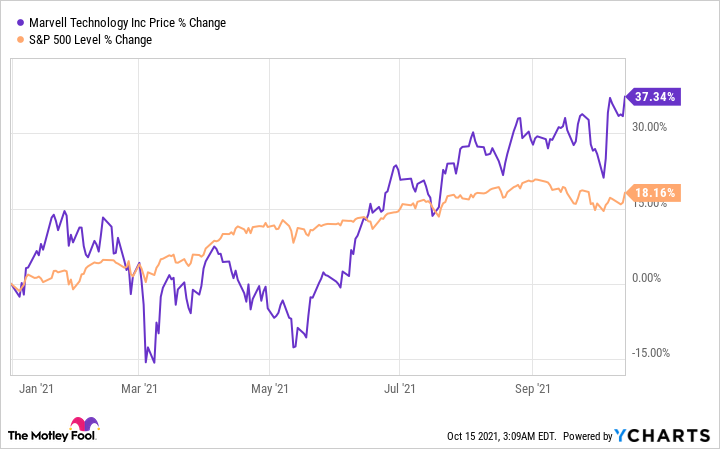 Returns as of 10/16/2021
Returns as of 10/16/2021
Founded in 1993 by brothers Tom and David Gardner, The Motley Fool helps millions of people attain financial freedom through our website, podcasts, books, newspaper column, radio show, and premium investing services.
Shares of Marvell Technology Group (NASDAQ:MRVL) have been in fine form over the past six months, beating the broader market comfortably on the back of robust demand for its chips, which are used in several fast-growing applications such as 5G wireless networks, cloud computing, automotive, and the industrial market.

MRVL data by YCharts
However, as evident from the chart above, the stock has received a big shot in the arm this month. Shares of the company are taking off in October thanks to a spate of price-target upgrades by Wall Street analysts in response to Marvell’s investor day presentation, which pointed toward an acceleration in the company’s revenue and earnings. Rosenblatt Securities, for instance, raised its price target on Marvell stock to $100, which implies a 53%-plus upside from current levels, while Jefferies’ price target of $82 points toward 25% upside.
Let’s look at the reasons why Wall Street is upbeat about Marvell Technology.
At its 2020 investor day, Marvell management said that it expected revenue to increase at a compound annual growth rate (CAGR) of 10% to 15% over the long run. This year, management has upgraded its long-term revenue CAGR forecast to a range of 15% to 20%. Additionally, Marvell now expects its long-term gross margin to sit between 64% and 66%, compared to last year’s estimate of 63% to 65%.
What’s more, the operating margin is now expected to land between 38% and 40% over the long run, compared to the earlier estimate of 35%, thanks mainly to the slower-than-expected growth in the company’s operating expenses. Marvell sees its long-term operating expenses coming in at 26% to 28% of revenue, compared to last year’s estimate of 28% to 30%.
As a result, it wouldn’t be surprising to see a sharp uptick in the company’s bottom-line growth in the coming years. In fact, analysts expect Marvell’s earnings to grow at an annual pace of more than 38% for the next five years, which would be a huge jump over the 13% CAGR it has clocked in the last five years.
Given that Marvell is on track to take advantage of several fast-growing end-market opportunities, the company could indeed deliver such impressive growth in the coming years.
Marvell’s accelerated revenue growth in the coming years will be driven by the rapid expansion of new semiconductor opportunities. The automotive market, for instance, is expected to open a $1 billion revenue opportunity for Marvell from sales of Ethernet chips. Citing third-party estimates, Marvell points out that the shipments of automotive Ethernet ports could jump from an estimated 234 million units last year to 1.37 billion units in 2026, clocking a CAGR of 39% over the forecast period.
The company also points out that connected cars could contain as much as $72 worth of Ethernet content. Marvell is on its way to tap into this lucrative opportunity. The company claims that it is the first to the market with gigabit-class automotive Ethernet switches, and has scored design wins at 28 automotive OEMs (original equipment manufacturers), including seven out of the top 10.
Marvell is aiming to increase its share of the automotive Ethernet switch market to more than 50% from around 33% currently. The company is on track to increase its automotive revenue by seven times in the ongoing fiscal 2022 compared to fiscal 2020, and the opportunity ahead indicates that it should be able to sustain that momentum for a long time to come.
All in all, the automotive market should supercharge Marvell’s business in the long run — the segment generated just $57 million in revenue last quarter, jumping 125% year-over-year thanks to the ramp-up in demand. At the same time, Marvell’s addressable market in data center switches has also increased substantially, and the company is now in a solid position to take advantage of that market since its acquisition of Innovium.
Image source: Getty Images
Marvell anticipates that its serviceable revenue opportunity in the data center switch market could increase to $1.7 billion in 2024 compared to $1 billion this year, growing at an annual pace of 19%. With this acquisition, Marvell says that it now has a complete portfolio in the data center networking space.
In total, Marvell sees its overall serviceable addressable market growing to $30 billion per year by 2024, up from this year’s $20 billion. More importantly, the company expects to grow at twice the pace of the cloud, 5G, and automotive end markets, while growing at a faster pace than the broader infrastructure market as well. In other words, Marvell plans to expand its share of these fast-growing target markets.
Throw in the fact that Marvell has reduced its operating expenses as a percentage of revenue to 34% in the second quarter of fiscal 2022 from 43% in the first quarter of fiscal 2021, and the company seems to be on track for improved profitability in the future as it targets more reductions, as its long-term target indicates. All of this indicates why Marvell looks like a top growth stock in the long run. Investors who haven’t jumped on this bandwagon yet should consider doing so before it flies higher.

Discounted offers are only available to new members. Stock Advisor will renew at the then current list price. Stock Advisor list price is $199 per year.
Stock Advisor launched in February of 2002. Returns as of 10/16/2021.
Average returns of all recommendations since inception. Cost basis and return based on previous market day close.
Making the world smarter, happier, and richer.