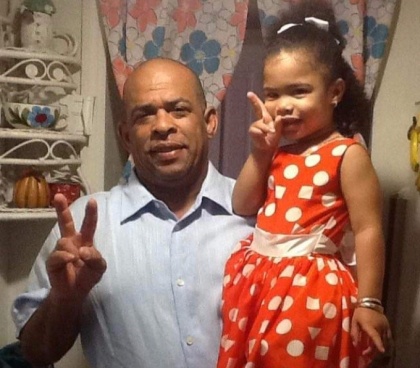 NEW YORK (CBSNewYork) — Police are looking for the hit-and-run driver who they say killed a deaf father on his bicycle in Brooklyn.
The tragedy happened on a stretch of Atlantic Avenue where the city has delayed proposed safety improvements, CBS2’s Ali Bauman reported Monday.
Marlenny Ramos is 6 years old and deeply misses her father, Jose Ramos.
“He was a special dad to me,” Marlenny said.
The 56-year-old, who is deaf, was killed Friday after leaving the Sutton Street Deli, where he worked for nearly a decade.
“He’s my brother. He worked with me for eight years. Do you imagine coming every day and then you don’t see him,” Fausto Ramos said.
Jose Ramos was riding his bike home in Cypress Hills at around 10 p.m., alongside his wife, who is also deaf.

Jose Ramos, left and Marlenny Ramos. (Photo: Isabel DelaCruz)
His sister explained that the couple was crossing Atlantic Avenue near Essex Street with the light, when a white sedan came speeding toward them on Atlantic. His wife tried in vain to call out to her husband.
“He was in the middle of the street, so when she turned her head to look at the car, it come fast. Then, when she turned back, she didn’t see my brother. She saw him like the next block,” Isabel DelaCruz said.
The stretch of Atlantic where the incident happened is so notoriously dangerous, Mayor Bill de Blasio prioritized Vision Zero safety improvements on the avenue when he took office.
“The people don’t respect the [speed] limit over there,” Fausto Ramos said.
The city spent $48 million adding planted medians and extending curbs across 21 blocks, but never began Phase 2 of the project, which was scheduled to start in 2019.
“The Phase 2 not moving, that’s news to me. So, I’m going to find out what’s going on. I want to see improvements made constantly. That’s what Vision Zero is all about,” de Blasio said.
The Department of Transportation said Phase 2, “which will implement safety improvements such as raising and extending the medians, adding left turn bays and signals, installing a grade-separated bike lane in each direction … is funded and will begin before the end of the year.”
In the meantime, police are still searching for the hit-and-run driver who took Jose Ramos from his family.
“Over here, in this neighborhood, everybody loved him,” DelaCruz said.
The DOT said it expects Phase 2 to be completed by 2024.
For more information on how you can help the Ramos family, please click here.
This story originally appeared on Oct. 18, 2021.