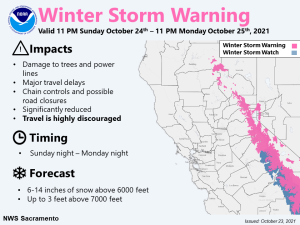 SACRAMENTO (CBS13) – We’ve talked about the rain moving into the area over the last week with the potential for flash floods and mudslides, but now we are seeing the real thing. The storm is here and last week’s dry skies and calm weather were definitely not a sign of what was to come.

Sacramento calls this a major system and it’s something we don’t see very often in October, or really in any season, fall or not.
For the latest on the storm, visit our storm updates page.
The amount of rain projected for downtown Sacramento by the National Weather Service is 4.86 inches in a 24-hour period. That would be the second-highest rainfall 24-hour total on record.
As of Sunday afternoon, we’ve seen about 2.5 inches in Downtown Sacramento, with some nearby regions, like Blue Canyon, getting as much as 6 inches.
If projections become a reality, this storm would be historic—comparable to similar storms in 2009 and 1880.
However, the storm doesn’t seem to be as severe as anticipated.
Still, at higher elevations, we are seeing the most rain.
Blue Canyon is a marker for the National Weather Service along Interstate 80. They forecasted a 24-hour rainfall total of 8.2 inches. That would make the fifth wettest 24-hour total ever on record for Blue Canyon and any area in the mountains if the forecast holds.
The storm could also make history because of its magnitude and that it’s happening so close to the recent fires. Burn scars this fresh combined with a storm of this size have officials on watch.
Craig Shoemaker, a meteorologist at the National Weather Service in Sacramento, said, “It’s just the matter that it’s coming so fast and over such a short period of time, and especially over those burn scars. And again, there’s going to be a major flood threat also in Sacramento and over the valley. We don’t want to downplay that at all. We’re talking about one of the highest rainfall totals, potentially that we’re currently forecasting over 24 hours period for Sacramento.”
Shoemaker’s words are another warning that storms like this can be unpredictable. So far, we’ve seen some minor flooding, accidents, and power outages. However, we will have to wait to see the full extent of the storm.
It’s important to have a way to get emergency alerts and stay vigilant in areas impacted by the fires.
Public officials advise having flashlights and fully charged cellphones in case of power outages in your area. Additionally, they say people should stay off of the roads if possible.
The National Weather Service projects that the rain will continue through the night.
For updates on the storm, visit our updates page.