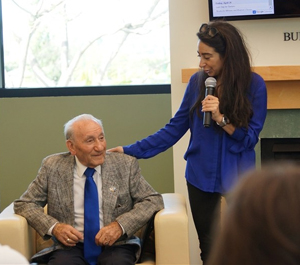 There is a Jewish story everywhere!
By Jacob Kamaras
When California state lawmakers recently announced $2.5 million in funding to support the expansion of Holocaust Museum LA, it marked the latest step toward realizing a cornerstone of the museum’s founding vision.
The state support will fund a new learning center pavilion and new programming for younger learners at the museum. It will also enable visitor capacity to increase to 500,000 per year, including 150,000 students, by 2030.
Holocaust Museum LA’s Vice President of Education and Exhibits Jordanna Gessler explained that education was one of the key aspects of the vision for the museum, formerly known as Los Angeles Museum of the Holocaust, when it was founded in 1961. Today, rising antisemitism in America has amplified the importance of that mission.
“In the last 11 years since opening our new facility, we have seen both a sharp increase in antisemitism and hatred and bigotry, and also a sharp increase in people looking for resources to combat that,” Gessler told the San Diego Jewish World. “We started outgrowing our spaces. And we asked ourselves, ‘How can we provide something that’s so needed in the community?’”
The museum’s expansion answers that call, including through a permanent exhibit allowing visitors to have a virtual conversation with a Holocaust survivor using a holographic capture and voice recognition software; a 200-seat theater for survivor talks, lectures, film screenings; two state-of-the-art classrooms for teacher training and Holocaust education programs; 2,500 square feet for special exhibits to provide unique and timely content; an authentic boxcar found outside of Majdanek death camp in Poland; and contemplative spaces to further realize and reflect upon the knowledge and concepts students gain from tours and educational programs.

Holocaust Museum LA’s expansion will not mark the first time Gessler plays a significant role in the early stages of a Holocaust education initiative. She was also part of the first cohort of the University of Haifa’s Weiss-Livnat International MA Program in Holocaust Studies, whose interdisciplinary approach to the study of the Holocaust, including courses in history, anthropology, psychology, education, and the arts, prepares students for career paths in Holocaust education or commemoration.
“Being in that first cohort, there was a sense of leadership and fearlessness from the program directors, of creating something that had not ever been created before and convincing people that it was not only needed, but an imperative,” Gessler said. “Today at Holocaust Museum LA, when I look at my role as a leader and forging a new path, I definitely look back at what I witnessed from the Weiss-Livnat program directors at the time.”
The University of Haifa program marked the first time in an academic setting that Gessler studied the Holocaust in the broader context of genocide and mass atrocities, and how the general public should understand those events. What she learned is that the Holocaust shows the human capacity to not only carry out the most horrific actions, but also to perform the most courageous actions for one another.
“For students to understand that antisemitism was not created by the Nazis and did not end with the end of the Holocaust is pivotal for them to understand modern antisemitism,” she said.
Another current priority for Holocaust Museum LA, particularly amid the new state funding, is reaching more students from underserved communities. Gessler said the museum’s founders envisioned that access to Holocaust education would always remain free of charge. The museum continues to work to ensure free admission for students as well as free bus transportation to the facility for students from schools funded by the federal Title 1 program, which assists schools with large concentrations of low-income students to help meet their educational goals. Gessler noted that 98 percent of the museum’s visitors do not identify as Jewish and more than 60 percent of student visitors attend Title 1 schools.
“It’s part of our philosophy that having cross-cultural conversations is the true way of strengthening the community through Holocaust education,” she said.
*
Jacob Kamaras is Managing Editor of the San Diego Jewish World
Your email address will not be published. Required fields are marked *


This site uses Akismet to reduce spam. Learn how your comment data is processed.

Like what you’ve read? Please help us continue publishing quality content with your non-tax-deductible donation. Any amount helps!