Crunchbase is the leading destination for millions of users to discover industry trends, investments, and news about global companies–from startups to the Fortune 1000.
The heaviest spenders in the venture capital world are showing no signs of paring down. If anything, the two most famously deep-pocketed investors–Tiger Global Management and the SoftBank Vision Fund–appear to be putting more capital to work.
Subscribe to the Crunchbase Daily
Those are the findings from our latest quarterly tally of the most active global startup investors.  In it, we find that the 14 most active investors participated in a total of 661 funding rounds in Q3 2021. We list the top names below, looking at deals they participated in as well as rounds they led: 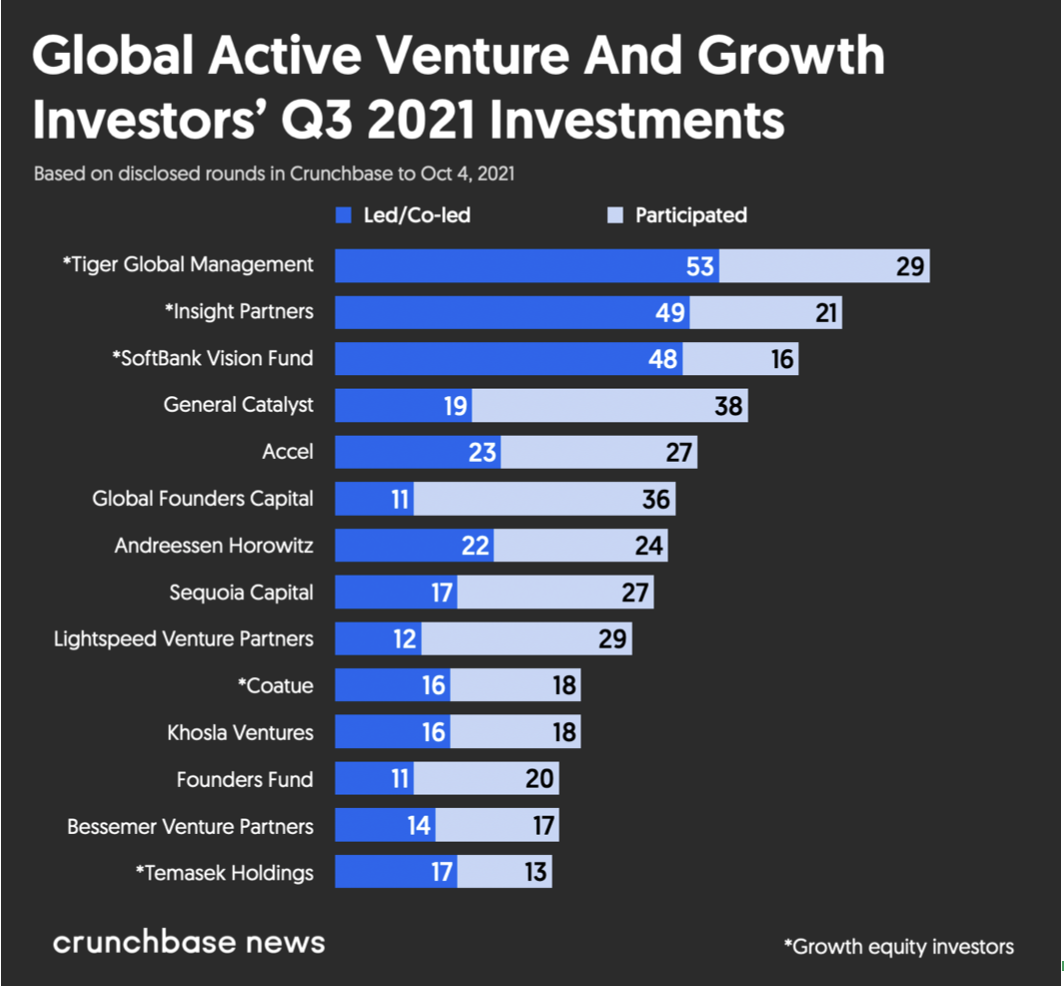 We did a separate ranking for lead investors. This is typically a more telling indicator of who is actually spending the most, as we know solo investors cover the full round and co-leads put up at least a big chunk of the financing. Here are the most active lead investors: 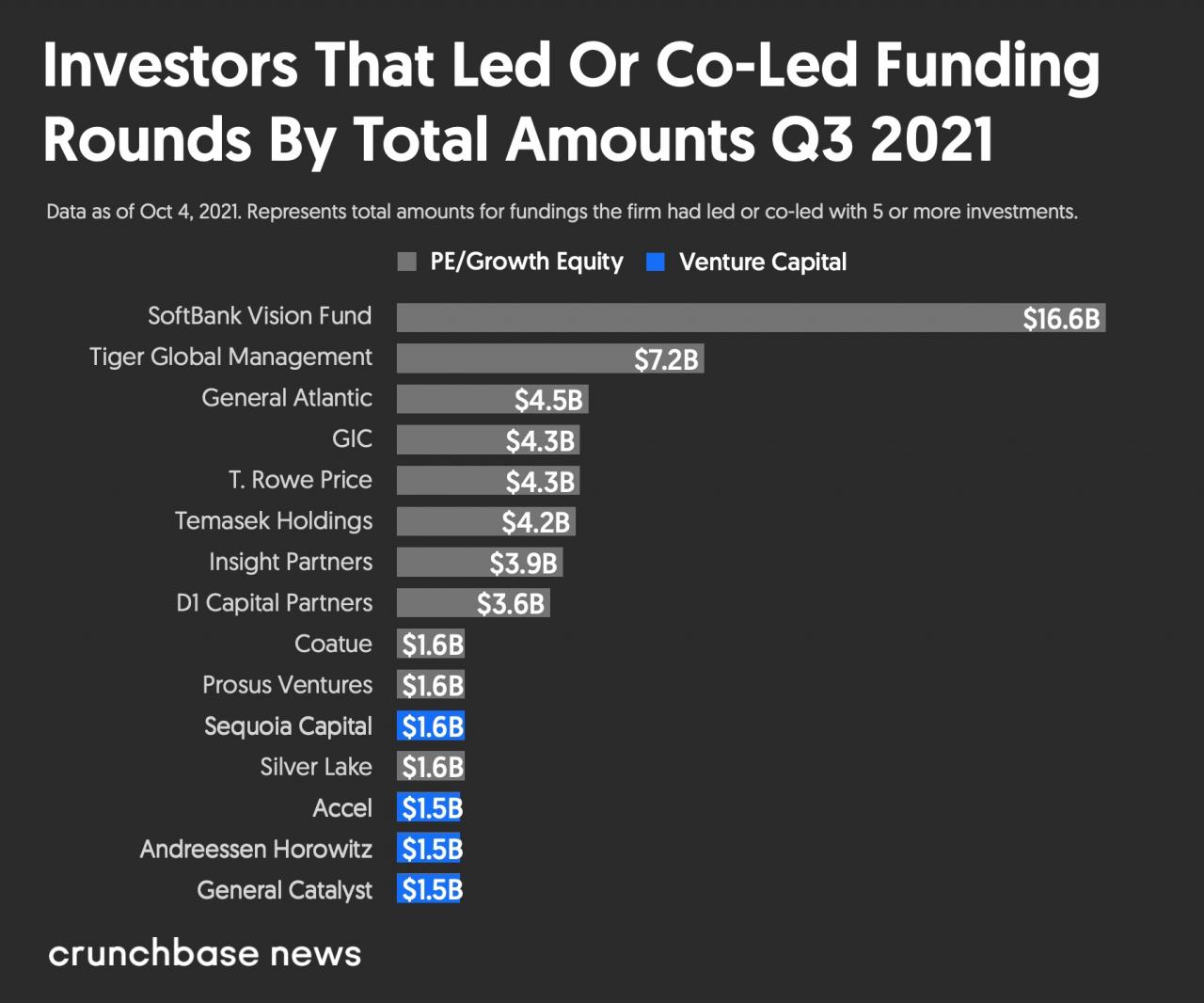 Neither of the above lists contain a lot of surprises. The most active global investors in Q3 are pretty much those that were most active in recent prior quarters. However, there are still some noteworthy takeaways, including the following:
SoftBank revved up in Q3: SoftBank led or co-led 48 rounds in Q3 of 2021, at a collective value of $16.6 billion. That’s a big jump from Q2, when the firm led or co-led 33 rounds totaling $10.25 billion.
What led the surge? The largest co-led deal was a $3.6 billion round for Indian e-commerce giant Flipkart, while the biggest solo financing was a $1.7 billion investment in South Korean travel platform Yanolja. Other large rounds included Turkish e-commerce provider Trendyol, Indian food delivery platform Swiggy, and British fintech Revolut. Additionally, SoftBank participated in 16 rounds for which it was not listed as lead investor, up from 11 in Q2.
Tiger led higher-valued rounds: Tiger Global led 53 rounds in each of the past two quarters. But rounds it led in Q3 were more valuable overall, totaling $7.2 billion, compared to $6.1 billion in Q2. For the just-ended quarter, the companies for which Tiger led or co-led the largest rounds include Revolut (co-led with SoftBank), Boston-based cloud security provider Snyk, and São Paulo-based e-commerce tools provider Nuvemshop.
Insight shares more rounds: Insight Partners has been regularly topping our lists as one of the prolific unicorn investors, and this past quarter was no exception. The venture and growth equity-focused firm led or co-led 49 rounds in Q3, valued at $3.9 billion, headlined by Nuvemshop (co-led with Tiger) and trading technology provider DriveWealth. The firm also took a nonlead role in another 21 deals.
Overall, it looks like Insight is sharing more of its deal flow with co-investors. In Q2 the firm led or co-led 46 of the 53 rounds it backed.
A16z, omnipresent in the U.S., is not so active internationally: For American startups, Andreessen Horowitz is one of the most active and deep-pocketed multistage investors. But outside the U.S., not so much. Out of 46 investments in Q3, 38 were U.S.-based, including recipients of the two largest rounds, cloud data companies Databricks and Fivetran.
Tech investors dominate: A final takeaway from our list is that all the most active players are predominantly tech investors. While several do also have some biotech deals in their portfolios, there are no biotech-focused firms among the most active.
Lastly, the most active and highest spending startup investors seem overall to be committing more deeply to their strategy rather than pulling back. As overall venture investment held steady around record highs this past quarter, it’s mostly well-known names that are keeping things up.
Illustration: Dom Guzman
Stay up to date with recent funding rounds, acquisitions, and more with the Crunchbase Daily.
The findings from our latest survey of per capita venture capital investment across a sample set of 24 countries that pulled in more than $1 billion…
Often, knowing less is more when it comes to the intimate details that led to the food ending up on your plate. But when it comes to cell-cultured…
For the second time in the last six quarters, total investment in India in the third quarter outpaced that seen in China—with $16.2 billion coming…