CAMBRIDGE, Mass., Nov. 17, 2021 /PRNewswire/ — Today MIT Technology Review and ProPublica announce the launch of a new five-part podcast series looking at the money, people, and technology behind the explosion of ransomware that is delivering hundreds of millions of dollars to cybercriminals around the world. 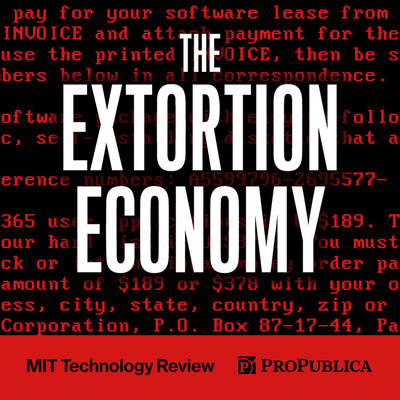 “The Extortion Economy”, which draws on the ProPublica investigation of the same name, explores the inner workings of a massive criminal industry that has taken hospitals, city governments, schools, and even an oil pipeline hostage. But while the tools of the ransomware trade may be new, the principles of extortion that underpin it go back centuries. Host Meg Marco takes listeners on a journey to the front lines of the ransomware fight, where she meets the people affected as well as those who are fighting back.
Episode 1: The Problem. A new-age iteration of the old-age extortion problem. A ransomware vigilante, a piracy (as in actual boats) expert, a school administrator, and a kidnapping victim share their experiences.
Episode 2: The Bad Actors. Look into a criminal world where the stakes are high and the methods increasingly businesslike … and meet the people who interact with the ransomware hackers.
Episode 3: All Cats, No Mice. After the Colonial Pipeline payment, the FBI followed the money, and cybersecurity researchers followed the ransomware group. We followed both.
Episode 4: Follow the Money. We look at the reasons ransomware is so hard to combat and ask hard questions about who is really helping the victims.
Episode 5: File Not Found. The problem of ransomware has many causes but no clear solution. What’s coming next?
The Extortion Economy is available through Apple Podcasts, Spotify, Google Podcasts, Stitcher, or wherever you get your podcasts.
Host Meg Marco is the Editor in Chief of Observer leading all editorial operations for the Observer brand. Before joining Observer Media, Meg held senior editorial positions at ProPublica, The Wall Street Journal and Axios. At ProPublica her team’s work was honored with the 2021 National Magazine Award for Social Media, and she was part of the team of editors whose work was a finalist for the 2021 Pulitzer Prize for Public Service. She is also formerly the editor and head of product of Consumerist, a Gawker Media publication that was later acquired by Consumer Reports. During her tenure, Consumerist produced deeply reported coverage of topics such as fraud, surprise medical bills, for-profit colleges, telecom policy, consumer privacy, and product safety. She is the author of Field Guide to the Apocalypse, a satirical guide to surviving the end of the world published by Simon & Schuster in 2005, well in advance of the actual end times.
ProPublica is an independent, nonprofit newsroom that produces investigative journalism in the public interest. With a team of more than 100 dedicated journalists, ProPublica covers a range of topics, focusing on stories with the potential to spur real-world impact. Its reporting has contributed to the passage of new laws; reversals of harmful policies and practices; and accountability for leaders at local, state and national levels. Since it began publishing in 2008, ProPublica has received six Pulitzer Prizes, five Peabody Awards, four Emmy Awards and nine George Polk Awards, among others.
About MIT Technology Review
Founded at the Massachusetts Institute of Technology in 1899, MIT Technology Review is a world-renowned, independent media company whose insight, analysis, and interviews explain the newest technologies and their commercial, social, and political impacts. MIT Technology Review derives its authority from its relationship to the world’s foremost technology institution and from its editors’ deep technical knowledge, capacity to see technologies in their broadest context, and unequaled access to leading innovators and researchers. MIT Technology Review’s mission is to bring about better-informed and more conscious decisions about technology through authoritative, influential, and trustworthy journalism. Subscribe. Listen. Attend. Follow: Twitter, Facebook, LinkedIn, Instagram.
Media Contact:
MIT Technology Review
[email protected]