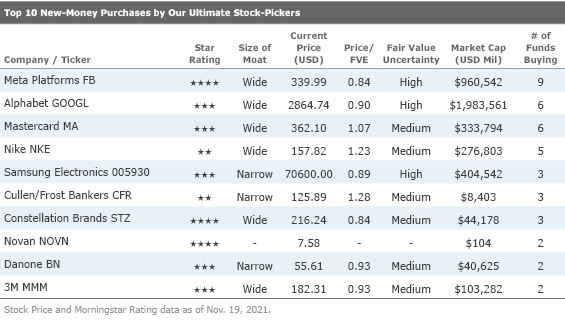 Several funds see value in technology and communication services.
For the past decade, our primary goal with Ultimate Stock-Pickers has been to uncover investment ideas our equity analysts and top investment managers find attractive, in a manner timely enough for investors to gain value. In cross-checking the most current valuation work and opinions of Morningstar’s own cadre of stock analysts against the actions of some of the best equity managers in the business, we hope to uncover good ideas each quarter that will be of interest to investors. With 22 of our Ultimate Stock-Pickers having reported their holdings for the third quarter of 2021, we now have a good sense of the stocks that piqued their interest during the period.
When we look at our Ultimate Stock-Pickers’ buying activity, we concentrate on high-conviction purchases and new-money buys. We think of high-conviction purchases as instances when managers have made meaningful additions to their portfolios, as defined by the size of the purchase in relation to the portfolio’s size. We define a new-money buy strictly as an instance where a manager purchases a stock that did not exist in the portfolio in the prior period. New-money buys may be done either with or without conviction, depending on the size of the purchase, and a conviction buy can be a new-money purchase if the holding is new to the portfolio.
We recognize that our Ultimate Stock-Pickers’ decisions to purchase shares of any of the securities highlighted in this article could have been made as early as the start of July, so the prices paid by our managers could be substantially different from today’s trading levels. Therefore, we believe it is always important for investors to assess for themselves the current attractiveness of any security mentioned here based on a multitude of factors, including our valuation estimates along with our moat, stewardship, and uncertainty ratings.
Despite earlier headwinds created by COVID-19, the overall market recovery from mid-2020 has been buoyed by a largely successful vaccine rollout in the United States. Certain industries remain more impacted than others (e.g., tourism, in-person shopping), though governments worldwide continue to take steps to mitigate the economic impact. The U.S. Federal Reserve has maintained the federal-funds rate to 0.00%-0.25%, and the U.S. government has taken many drastic measures since then to cushion the blow on the economy, including stimulus programs for consumers, unemployment benefits, easing pressures on debt markets, and establishing the PPP facility to help small businesses. With a democrat in the Oval Office, we could expect these measures to continue as the U.S. economy readies itself for a comeback. Similar programs have been implemented across Europe and Asia as countries seek to boost their economies. The U.S. economy has also been aided by a successful vaccine rollout with the majority of the adult population having received the COVID-19 vaccine as of the time of writing. With vaccine rollouts accelerating across the world amid a period of volatility and uncertainty, our Ultimate Stock-Pickers have managed to find value in individual stocks in a wide range of sectors such as industrials, technology, communication services, financial services, and healthcare.
In the top 10 high-conviction purchases list, the buying activity heavily leaned toward technology but also included industrials and healthcare. All 10 companies in the high-conviction purchases list received a wide or narrow economic moat rating from Morningstar analysts, keeping in line with trends we have witnessed over the past years. In the top 10 new-money purchases list, we note a multitude of technology names such as Alphabet (GOOGL), Meta (FB), and Samsung (005930). Similar to the companies on the high-conviction purchases list, nine out of the 10 companies in the new-money list received either a wide or narrow moat rating from Morningstar, indicating a clear preference for established blue-chip stocks. Meta received the highest number of new money purchases, with nine. Alphabet and Mastercard (MA) received six each. The three names we find most interesting on the high-conviction purchases and new-money lists are wide-moat rated UnitedHealth Group (UNH), Nvidia (NVDA), and Paccar (PCAR). 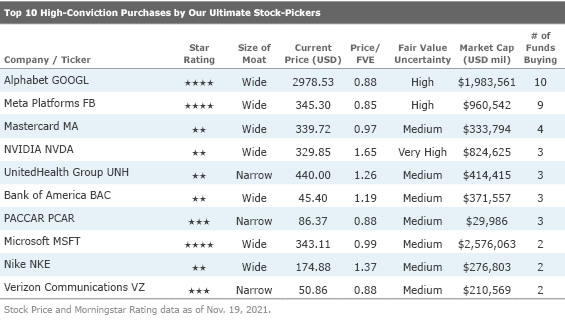 There was a moderate amount of crossover between our two top 10 lists this period, with four names appearing on both lists. This quarter, three stocks received four or more high-conviction purchases from our Ultimate Stock-Pickers. These names include Alphabet, Meta, Mastercard, and Nike (NKE), with Alphabet having received 10 high-conviction purchases. All three of these companies have economic moats according to Morningstar research, which indicates that money managers place an emphasis toward blue-chip stocks such as these in a period of uncertainty.

Justin Pan does not own (actual or beneficial) shares in any of the securities mentioned above. Find out about Morningstar’s editorial policies.
Transparency is how we protect the integrity of our work and keep empowering investors to achieve their goals and dreams. And we have unwavering standards for how we keep that integrity intact, from our research and data to our policies on content and your personal data.
We’d like to share more about how we work and what drives our day-to-day business.
We sell different types of products and services to both investment professionals and individual investors. These products and services are usually sold through license agreements or subscriptions. Our investment management business generates asset-based fees, which are calculated as a percentage of assets under management. We also sell both admissions and sponsorship packages for our investment conferences and advertising on our websites and newsletters.

How we use your information depends on the product and service that you use and your relationship with us. We may use it to:
To learn more about how we handle and protect your data, visit our privacy center.
Maintaining independence and editorial freedom is essential to our mission of empowering investor success. We provide a platform for our authors to report on investments fairly, accurately, and from the investor’s point of view. We also respect individual opinions––they represent the unvarnished thinking of our people and exacting analysis of our research processes. Our authors can publish views that we may or may not agree with, but they show their work, distinguish facts from opinions, and make sure their analysis is clear and in no way misleading or deceptive.
To further protect the integrity of our editorial content, we keep a strict separation between our sales teams and authors to remove any pressure or influence on our analyses and research.
Read our editorial policy to learn more about our process.
© Copyright 2021 Morningstar, Inc. All rights reserved. Dow Jones Industrial Average, S&P 500, Nasdaq, and Morningstar Index (Market Barometer) quotes are real-time. This site is protected by reCAPTCHA and the Google Privacy Policy and Terms of Service apply.
Terms and Conditions Privacy Center Disclosures Member User Agreement Corrections Cookies Accessibility