At its annual re:Invent conference, AWS today announced two new initiatives for the automotive industry. One is a new product, AWS FleetWise, a new service that makes it easier for automakers to collect and retrieve sensor and telemetry data from their vehicle fleets. The other is AWS Automotive, a broader, industry-specific initiative that brings together a range of the company’s products under a single umbrella, similar to AWS’s other industry solutions like AWS for Industrial.
Collecting sensor data isn’t necessarily a new thing for automakers. But FleetWise promises to provide an end-to-end solution that will give them a lot of flexibility. Maybe they want to smartly filter data right on the car to reduce the amount of data transferred to the cloud, or only pull in data from specific sensors like engine temperature, or maybe they do indeed want to get all of the data. It’s up to the individual auto manufacturer to decide what data they need. 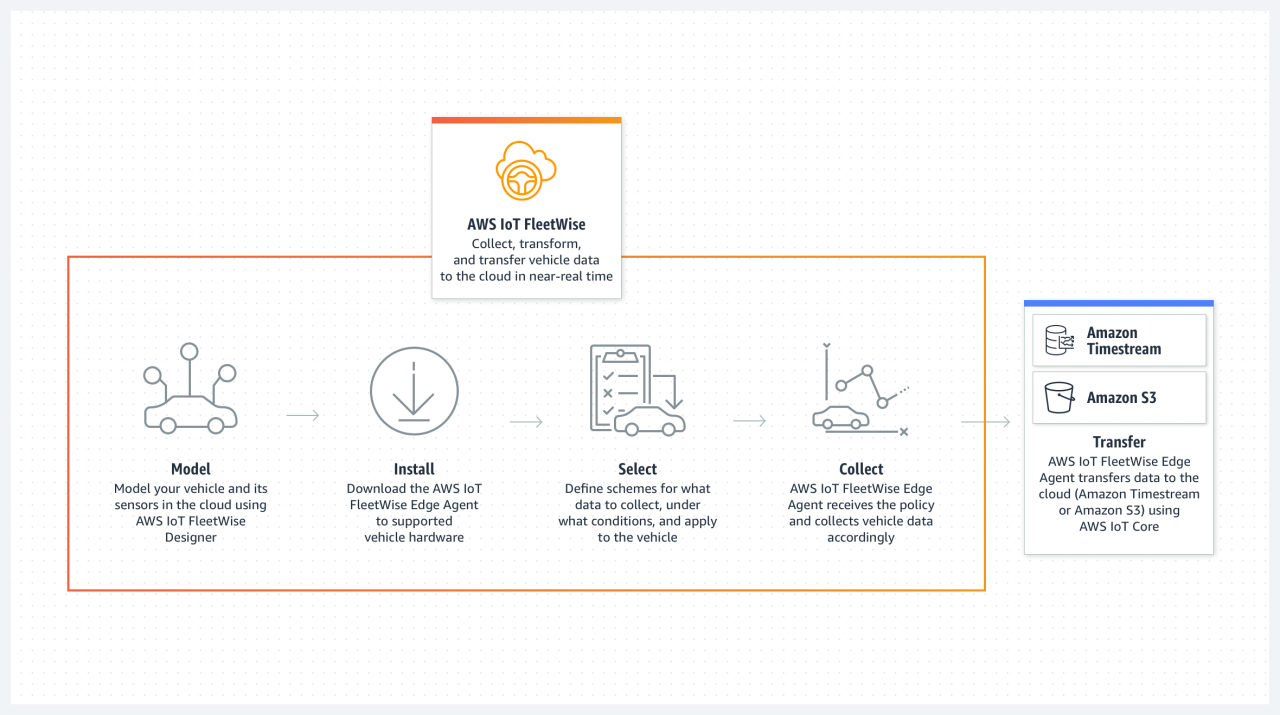 Image Credits: AWS
Mike Tzamaloukas, the general manager of IoT Automotive at AWS, told me that no matter what data gets used, to get started with FleetWise, the manufacturer has to first describe and model the vehicle and its sensors, using the open source Vehicle Signal Specification that a number of automakers have already adopted.
AWS then provides the automakers with the source code to interact with FleetWise and collect data. The automaker’s developers can then take this code, modify it as needed and build it into the vehicle gateway, while its engineers can start building data collection campaigns to pull in data from the live vehicle fleet.
“The possibilities with data collection campaigns are endless and we are pushing the envelope in that data collection campaigns are not just time-based, are not just event-based, but it’s intelligent data filtering across your entire fleet,” Tzamaloukas explained. “That’s where we hope to give the automakers the ability to pull in the terabytes of data generated from all kinds of different cars out there, but at a much higher signal-to-noise ratio.”
Tzamaloukas expects that FleetWise will be generally available in 2022 and that we’ll see cars available for purchase with it built-in around 2024. A lot of this data may stay in the automakers’ back ends, but he noted that they could make some of it available to drivers as well, maybe in the form of more detailed monthly vehicle health reports.
As for AWS for Automotive, AWS’ Dean Phillips, who heads up this initiative, told me that he sees it as a way to clarify AWS’ capabilities for the industry. “We’re pretty excited about AWS for Automotive because it really helps clarify for our customers the different solutions that we have from AWS,” he said. These solutions include a number of different solutions areas that automakers can adopt as needed, ranging from cutting-edge autonomous mobility services to product engineering support, supply chain tracking and digital customer engagement solutions.