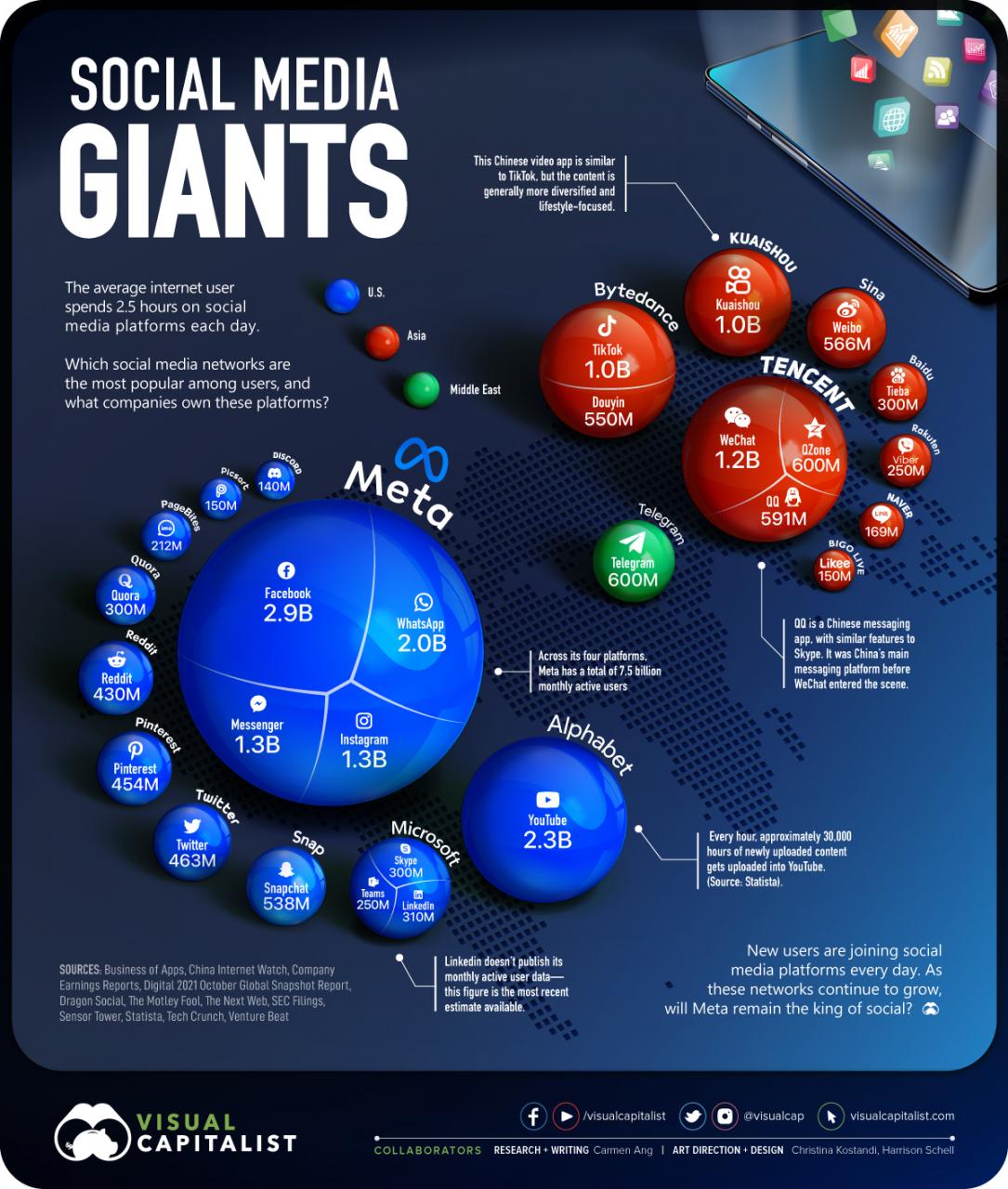 Can I share this graphic?
Yes. Visualizations are free to share and post in their original form across the web—even for publishers. Please link back to this page and attribute Visual Capitalist.

When do I need a license?
Licenses are required for some commercial uses, translations, or layout modifications. You can even whitelabel our visualizations. Explore your options.

Currently, there are over 4.5 billion people around the world who use some form of social media—about 57% of the global population.
Yet, while social media’s audience is widespread and diverse, just a handful of companies control a majority of the world’s most popular social media platforms. Meta, the tech giant formerly known as Facebook, owns four of the five most widely used platforms.
This graphic highlights the biggest social networks across the globe, measured by their monthly active users (MAUs).
Note: We’ll be using terms like “social network” and “social platform” interchangeably to refer to various messaging, video, and image-sharing platforms that have social attributes built in.
To measure each platform’s MAUs, we dug into various sources, including the most recent company SEC filings, and quarterly earnings reports.
A majority of Meta’s user base comes from its most popular platform, Facebook—the social media giant currently has around 2.9 billion MAUs worldwide.
Where in the world are Facebook users located? The platform’s biggest user base comes from India, with an audience size of almost 350 million. Its second-largest user base is the United States, with 193.9 million users, while Indonesia comes in third with 142.5 million.
But Facebook isn’t the only social giant in Meta’s network of platforms. WhatsApp has approximately 2 billion MAUs, making it Meta’s second-largest platform, and the third-largest social network overall.
Like Facebook, a significant number of WhatsApp users are located in India, with roughly 390 million users. Brazil has a large portion of WhatsApp users as well, with an audience size of 108 million.
Meta currently dominates the social network landscape, with a combined total of 7.5 billion MAUs across all four of its platforms. However, a few other companies also hit the one billion MAU mark across all their platforms on the list:
After Meta, Tencent has the second-highest reach thanks to its three platforms—WeChat, Qzone, and QQ. Of the three, WeChat is currently the most popular. On average, WeChat users send about 45 billion messages a day.
Third on the list is Alphabet, thanks to its one platform, YouTube. Founded in 2005, this video streaming platform currently has over 50 million content creators, who share approximately 500 hours of video content every minute.
Close behind Alphabet is Bytedance, with a combined 1.6 billion MAUs across its two platforms—Douyin and its international counterpart TikTok. While the apps share a lot of similarities, they function as completely separate entities, with different registration, content policies, and regulations.
While social media networks often transcend country borders, it’s worth noting that the online realm does not completely escape the constraints and regulations of our physical world.
Since 2009, Facebook has been banned in China for not complying with censorship rules. Facebook was also blocked in Iran and Syria around the same time and has been blocked sporadically since.
In 2020, the Trump administration tried to enact a similar ban against TikTok, but the order was blocked by a federal judge and eventually revoked by the Biden administration a year later.
Despite various bans and roadblocks, it’s clear that social media platforms have seeped into the lives (and onto the screens) of users across the globe. And as internet access worldwide continues to grow, so too will the number of social media users.

The World’s Biggest Startups: Top Unicorns of 2021
From Amazon to Zoom: What Happens in an Internet Minute In 2021?
The World’s Biggest Startups: Top Unicorns of 2021
From Amazon to Zoom: What Happens in an Internet Minute In 2021?
The World’s 100 Most Valuable Brands in 2021
Ranked: The World’s Fastest Growing Brands in 2021
Timeline: Looking Back at 10 Years of Snapchat
The World’s Top 50 Influencers Across Social Media Platforms
Here are the world’s biggest startups with a valuation above $10 billion.
Published
on
By
Many entrepreneurs start businesses around the world, but only the most successful new companies become “unicorns”—the biggest startups with a valuation above $1 billion.
Some unicorns are little-known companies making quiet but impactful strides in software, healthcare, automotive, and other fields. Others have already become well-known industry leaders, like aerospace manufacturer SpaceX and game developer and publisher Epic Games.
In total, there are more than 800 unicorn startups globally. That said, this visualization specifically hones in on the world’s decacorns (unicorns with valuations above $10 billion) as of December 2021 according to CB Insights.
The world’s most prominent unicorns constantly see their valuations change as they enter different rounds of funding or maturity.
In December 2021, there were 35 startups with a valuation above $10 billion, spread out across different countries and industries.
Many of the most valuable startups are already giants in their fields. For example, social media company Bytedance is the developer behind video network platform Douyin and its international version, TikTok, and has amassed a valuation of $140 billion.
Financial services and payment software company Stripe jumped from a valuation of $36 billion to $95 billion over the course of the COVID-19 pandemic.
Even less universally prominent names like Swedish fintech Klarna ($45.6 billion) and Australian graphic design platform Canva ($40.0 billion) are well known within their respective fields.
But private valuations don’t last forever. Many eventually go public, like electric vehicle maker and Tesla competitor Rivian, which had a valuation of $27.6 billion before listing on the NASDAQ.
Breaking down the world’s biggest startups by industry highlights that tech is still king in most investing circles.
More than 77% of unicorns valued above $10 billion are categorized directly in tech-related fields, primarily in financial and commerce software.
And many of the unicorns categorized in non-tech fields are still technology companies at their core. In fact, Indonesia’s logistics and package delivery company J&T Express is one of the few unicorns not directly in tech, though it still uses automated sorting in its warehouses.
It was one of the few startups to come from somewhere other than the U.S. or China, which together accounted for over 70% of the 35 biggest startups. The UK (3) was the next most-frequently listed headquarters, while Australia, Brazil, Germany, India and Sweden each had one of these unicorns on the list.
With constantly fluctuating valuations and technological breakthroughs always around the corner, the next $10 billion unicorn could come from almost anywhere.

Central bank digital currencies are on the horizon. What do 65 central banks representing 91% of global GDP think about them?
Published
on
By
In the late 1600s, the introduction of bank notes changed the financial system forever. Fast forward to today, and another monumental change is expected to occur through central bank digital currencies (CBDC).
A CBDC adopts certain characteristics of everyday paper or coin currencies and cryptocurrency. It is expected to provide central banks and the monetary systems they govern a step towards modernizing.
But what exactly are CBDCs and how do they differ from money we use today?
To better understand a CBDC, it helps to first understand the taxonomy of money and its overlapping properties.
For example, the properties of cash are that it’s accessible, physical and digital, central bank issued, and token-based. Here’s how the taxonomy of money breaks down:
In essence, digital currency is the electronic form of banknotes that exists today. Therefore, it’s viewed by some as a modern and efficient version of the cash you hold in your wallet or purse.
On the other hand, cryptocurrencies like Bitcoin are a store of value like gold that is secured by encryption. Cryptocurrencies are privately owned and fueled by blockchain technology, compared to digital currencies which do not use decentralized ledgers or blockchain technology.
Digital currencies are issued by a central bank, and therefore, are backed by the full power of a government. According to the Bank for International Settlements, over 20% of central banks surveyed say they have legal authority in issuing a CBDC. Almost 10% more said laws are currently being changed to allow for it.
As more central banks issue digital currencies, there’s likely to be favorability between them. This is similar to how a few currencies like the U.S. dollar and Euro dominate the currency landscape.
There are several positives regarding the issuance of a CBDC over other currencies.
First, the cost of retail payments in the U.S. is estimated to be between 0.5% and 0.9% of the country’s $20 trillion in GDP. Digital currencies can flow much more effectively between parties, helping reduce these transaction fees.
Second, large chunks of the global population are still considered unbanked. In this case, a CBDC opens avenues for people to access the global financial system without a bank. Even today, 6% of Americans do not have a single bank account.
Other motivations for a CBDC include:
An example of payments efficiency can be seen during the onset of the COVID-19 pandemic, when some Americans failed to receive their stimulus check. Altogether, some $2 billion in funds have gone unclaimed. A functioning rollout of a CBDC and a more direct relationship with citizens would minimize such a problem.
Although widespread adoption of CBDCs is still far away, research and experiments are making notable strides forward:
The U.K. central bank is less optimistic about a rolling out a CBDC in the near future. The proposed digital currency—dubbed “Britcoin”—is unlikely to arrive until at least 2025.
Wherever you look, technology is disrupting finance and upending the status quo.
This can be seen through the rising market value of fintech firms, which in some cases are trumping traditional financial institutions in value. It is also evident in the rapid rise of Bitcoin to a $1 trillion market cap, making it the fastest asset to do so.
With the rollout of central bank digital currencies on the horizon, the next disruption of financial systems is already beginning.

A Deep Dive Into the World’s Oceans, Lakes, and Drill Holes
Visualizing The Most Widespread Blood Types in Every Country
The Problem With Our Maps
24 Cognitive Biases That Are Warping Your Perception of Reality
From Amazon to Zoom: What Happens in an Internet Minute In 2021?
Ranked: The 35 Vehicles With the Longest Production Runs
The Richest Women in America in One Graphic
Ranked: The Best and Worst Pension Plans, by Country
Copyright © 2021 Visual Capitalist