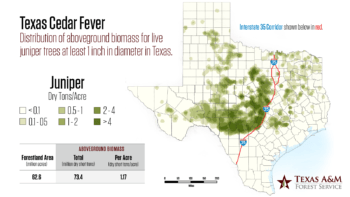 Cedar fever season is upon us once again, complete with runny noses, itchy eyes and general misery. But what exactly is cedar fever, and why is it so insufferable this time of year?
To start, cedar fever isn’t a flu or a virus – it is an allergic reaction to the pollen released by mountain cedar trees. In Texas, the predominant species of mountain cedar is the Ashe juniper.
“Cedar fever is the worst west of I-35, where you have primarily juniper mixed in with oaks and some other species,” said Jonathan Motsinger, Texas A&M Forest Service Central Texas Operations department head. “And because all of those junipers are producing pollen at the same time, you’re going to get a higher concentration of pollen in the air.”
The sheer quantity and density of Ashe junipers in Central Texas is one of the main factors contributing to cedar fever. According to Karl Flocke, a woodland ecologist for Texas A&M Forest Service, the pollen from Ashe junipers isn’t particularly allergenic or harmful – it’s just so concentrated that even if you aren’t generally susceptible to allergies it could still affect you.
“There are millions of junipers out there, all releasing pollen at the same time,” Flocke said. “You can’t help but breathe it in. And when you do, your body reacts as it would to any perceived threat – it tries to fight it.”
Since the pollen is spread by the wind, cedar fever can affect individuals far removed from areas with a high concentration of juniper trees. And the source isn’t limited to Ashe junipers. In more eastern parts of the state, there are also eastern red cedars that pollinate around the same time and can induce a similar response from people’s auto-immune systems.
Besides the sheer quantity of pollen released, cedar fever is mostly problematic because of when the pollen is released. Most trees pollinate in the spring when many are expecting to have allergic reactions. While ragweed pollen and mold spores can contribute to allergies in the fall, very few plants pollinate during the winter. Juniper trees are the exception.
These trees typically begin producing pollen in mid-December, often triggered by colder weather or the passage of a cold front. Pollen production reaches its peak in mid-January before slowly tapering off toward the beginning of March, just in time for oak pollen and other spring allergens to start up.
“Immediately before and after a cold front, it gets very dry and windy and the pressure changes very rapidly,” Flocke said. “This triggers the opening of pollen cones and the release of the pollen grains. When you see the pollen billowing off a tree that has just ‘popped,’ or opened its cones, it looks very similar to smoke coming from a wildfire.”

While this creates for some fascinating imagery, it can also lead to some serious misery. For people new to the Central Texas region or unfamiliar with cedar fever as a whole, it can also lead to confusion since the pollination period of mountain cedar trees is smack dab in the middle of cold and flu season – or a pandemic.
It’s not uncommon for people experiencing cedar fever to mistake their symptoms as a cold or the seasonal flu, especially given the variety of symptoms triggered by cedar fever. These include fatigue, sore throat, runny nose, partial loss of smell and – believe it or not – some people actually do run a slight fever. However, if your fever is higher than 101.5°F, then pollen likely isn’t the cause.
There are a few symptoms of cedar fever that are not linked to coronavirus or the flu though, like itchy, watery eyes, blocked nasal passages and sneezing. But there is one symptom that, according to Flocke, is a clearer indicator.
“Typically, mucous from allergies is clear and runny, while other infections lead to thicker colored mucous,” Flocke said.
You can treat cedar fever by taking allergy medications and antihistamines, but you should consult with your physician or health care professional before taking new medications. You can also try to anticipate the pollen by tuning in to your local news station. Many stations will give you the pollen count and can predict when it’s going to be a particular pollen-heavy day. On those days, it’s smart to keep windows and doors closed, to limit the amount of time you spend outdoors and to change air conditioning filters in your car and home.
Removing juniper trees from your property isn’t recommended, primarily because the pollen is airborne and — since they often wait to release their pollen until it’s cold, dry and windy — that pollen can blow for miles. It’s also important to note that only male juniper trees release pollen.
“The male trees have pollen cones, and the female trees have berry-like cones, which are very inconspicuous, but that’s what is pollenated from the male trees,” Motsinger said.
While junipers are notorious for releasing their fever-inducing allergens, they also have immense health benefits. Their berries, for instance, are used to make medicines and oils that can treat a variety of ailments, from an upset stomach to snake bites. They are high in nutrition and vitamins, providing a sustainable source of food for wildlife and soil enrichment. They grow in terrain that isn’t particularly hospitable to other tree species. Most importantly, they provide the mental, physical and environmental health benefits of trees and forests everywhere.
Ultimately, mountain cedars are singled out for the unusual time of year in which they pollinate.
“Many trees rely on airborne pollination,” Flocke said. “In other parts of the country, folks suffer from pine or elm allergies. Here in the springtime, there is so much oak pollen collecting on surfaces that I have to wash my car’s windshield daily just to see out of it.”
For more information about how to identify Ashe junipers and/or eastern red cedars in your own backyard, check out the Texas A&M Forest Service’s Texas Tree ID webpage or the My Tree ID mobile app. You can also see the distribution of junipers across the state via our Forest Distribution App, which can identify the distribution of native tree species across the state of Texas.
This article, adapted from the Texas A&M Forest Service, originally appeared on AgriLife Today.
The Texas A&M Forest Service urges Texans to help prevent wildfires during hunting season.
Since June, 174 agency personnel have responded to wildfire incidents in other states.
Anything green has a chance of recovery, experts say.
As 2021 comes to a close, take a look back at 12 uniquely Aggie moments that will have a lasting impact.
A new report identifies six strategies for improving the success of U.S. COVID-19 vaccination efforts.
Texas A&M AgriLife Research is taking a novel approach to protection from bites and disease.
Subscribe to the Texas A&M Today newsletter for the latest news and stories every week.