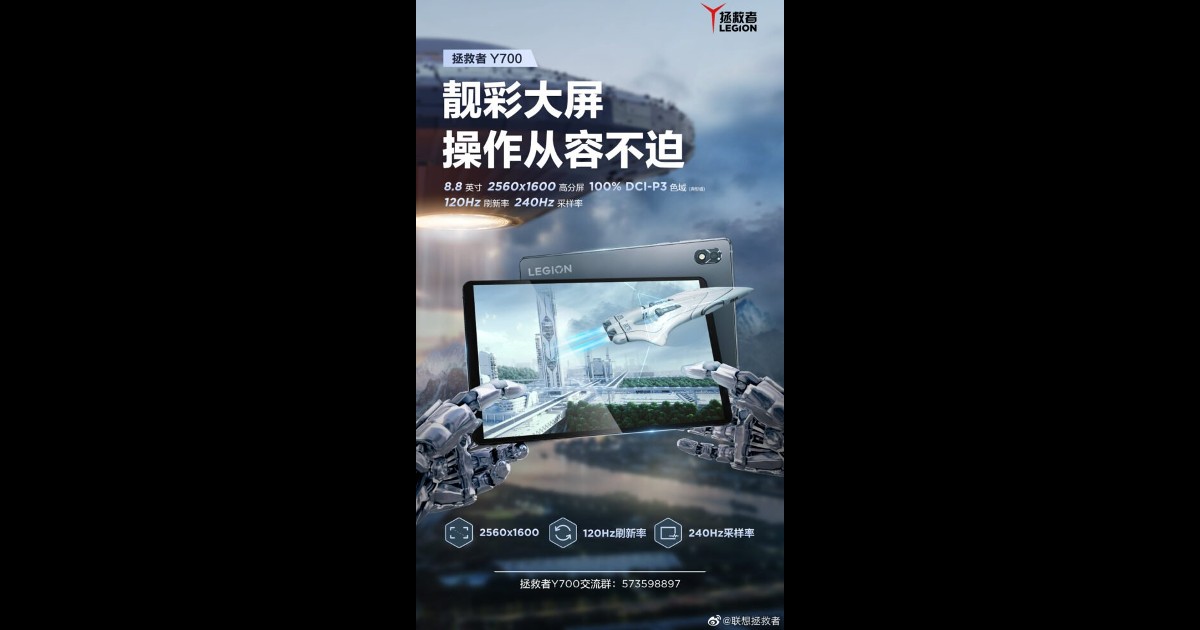 The Legion gaming series from Lenovo has been highly regarded by gamers, and Legion laptops have proven their worth in the market. Lenovo teased a new tablet with the Legion logo a few days ago in order to broaden the Legion line. Lenovo teased a tablet with the Legion logo a few days back, showcasing its appearance, design, and Dolby Vision audio in part. In a recent Weibo post, Lenovo Legion has officially unveiled some of the specifications as well as the name of this gaming tablet, which is known as the Lenovo Legion Y700 Gaming Tablet. Let's look at what else this tablet has to offer in more detail.
Lenovo Legion Y700 Gaming Tablet
The Lenovo Legion Y700 has an 8.8-inch display with 2560 x 1600p resolution, 100 per cent DCI-P3 colour gamut, 120Hz high refresh rate, and 240Hz touch sampling rate, according to the official poster. Furthermore, a single camera with a flash on the back can be seen in the poster image. The front bezel of the Legion Y700 is unequal in width, with a single back camera with a flash, and the body is constructed with right-angle bezels and brushed stainless steel, according to the preview posters. JBL, Dolby Vision, and Dolby Atmos tags were previously seen on one of the tablet's corners, hinting that the tablet will likely include some incredibly high-quality speakers for a superb gaming experience. As a result, not only the screen but also other vital aspects will be extremely competitive.

Lenovo hasn't revealed any other information about the impending tablet, but as a gaming-focused gadget, it is anticipated that the tablet will be powered by Qualcomm's latest and best Snapdragon 8 Gen 1 processor.
Gaming fans are always looking for something that can be used on the move and allows them to play games at any time and from any location. Previously, gamers were using the iPad Mini for gaming, but due to the iPad Mini's low battery performance and limited space, they hoped that other manufacturers would focus on gaming tablets and release a small-screen, high-specs premium Android tablet. It's evident from the Legion branding that this tablet is geared at gamers, primarily mobile gamers who want something larger than a smartphone but not as large as a tablet.
For more tech-related news subscribe to our YouTube Channel if you haven’t done it yet.