Everything Cruise Lines Don't Want You to Know
With recent news accounts revealing that Royal Caribbean is housing at sea thousands of COVID-19 infected crew members on four cruise ships, the cruise line is claiming that infected ship employees are largely asymptomatic.
Royal Caribbean International recently told the Washington Post that it is “transferring workers to crew-only ships to wait out their isolation periods.” A cruise line spokesperson claimed that “we have been using out-of-service ships for our crew members who are asymptomatic and mildly symptomatic” in order to “keep our crew and ships as healthy as possible.”
But this seems hardly true. The vast majority of infected crew members on these floating quarantine and so-called hospital ships are clearly symptomatic. 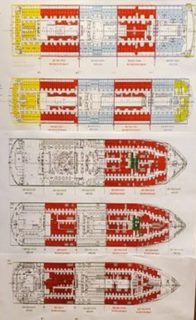 Internal charts and documents from one of the ships (sent by  a trusted source) show that symptomatic crew are assigned to the red zone and asymptomatic and close contacts to the yellow zone. Shockingly, well over 80% of infected crew members on the Vision of the Seas, for example, have been assigned to the red zones and the minority to the yellow zones close to infected crew. As you can see from the chart to the right (from the Vision of the Seas)  the red zones comprise the majority of the cabins on decks 2, 3, 4, 7 and 8. The few yellow zones on decks 7 and 8 are designated only for asymptomatic crew members or close contacts.
This chart, and other information, was provided by a concerned crew member who wishes to stay anonymous.
Balconies are only on the exterior cabins on decks 7 and 8 (former guest cabins). All of the ill and symptomatic crew members who are placed in cabins on decks 2, 3, and 4 have no balconies and those on interior cabins on those decks have no windows either.
This means that the already infected crew members who are in either window-less or balcony-less interior decks on 7 and 8 or decks 2, 3 and 4 have no fresh air. The uninfected close contacts are in close proximity to the red zones are share the same recirculated air.
If this concerns you, it should. Don’t forget, COVID-19 is an airborne virus.
It is difficult to imagine a worse place to quarantine and house infected and ill employees than in the bowels of the ship where they are forced to breath recirculated air which is inhaled and exhaled by over 1,500 other infected crew employees.
Royal Caribbean claims that it has retrofitted its old ships like the 23 and 24 year-old Vison and Rhapsody with HEPA filters, but is this really true not only for the guest cabins but the crew quarters as well?
In any event, there is also a distinct concern that such an claustrophobic environment is harmful to the mental health and well-being of the crew.
Personally, I could not possibly stay behind a closed door in a stuffy crew cabin (resembling a large walk-in closet) without a window for even a few hours, much less for ten days of quarantine. How do you say, panic attack?
Read: Diary of a comedian trapped in COVID cruise ship quarantine.
Is this environment really so that the cruise line can “keep our crew and ships as healthy as possible” as the Royal Caribbean spokesperson claims?
Then there is the question of providing medical treatment to the symptomatic employees. On the Vision, there are only two ship doctors and four nurses for over 1,500 crew members, over 80% are symptomatic with fever, headaches, burning throats and fatigue. Some crew, a minority, experience coughs, shortness of breath, and more serious symptoms.
Perhaps the real reason to keep the infected and ill crew on the Vision and other quarantine ships is to avoid the considerable costs of hotels and hospitals in the U.S. There are at least 4,000 Royal Caribbean crew members on the four “plagues ships” currently used by Royal Caribbean (Vision, Rhapsody, Jewel and Serenade). A hotel in Miami and three meals runs around $250 person a day. At 4,000 ill crew members (which the cruise line would not deny or admit to the Post) that’s $1,000,000 a day that the cruise lines figures it can save by keeping the ill crew at sea. This doesn’t include the costs of shoreside medical expenses associated with the excellent U.S. medical system that Royal Caribbean tries to prevent is ship employees from receiving.
The number of infected crew members in the Royal Caribbean fleet is staggering. Royal Caribbean refuses to disclose the official numbers, but there is reliable information that there are a minimum of 1,500 infected ship employees transferred to the Vision and Rhapsody each and over 700 diseased crew members to the Jewel. Add in the several hundred transferred from the Liberty of the Seas to the Serenade late on Wednesday, and the total number of infected crew transferred transferred to these four ship is currently at a minimum of 4,000 and probably a few thousand more.
Thanks to the many crew members who have risked their employment by providing some of the information and documents I have referred to above.
Have a comment or question? Please leave one or join the discussion on our Facebook page.
January 14, 2022 Afternoon Update: This morning the Allure OTS met the Vision OTS in Coco Cay, Bahamas and transferred around 165 infected crew members to the Vision and took on 85 crew:
Transfer of infected/ill @RoyalCaribbean crew to quarantine / hospital ship Vision OTS continues with Allure OTS transferring around 165 crew to Vision OTS after Allure OTS took on 85 crew from Vision OTS in Coco Cay @RoyalCaribbean #COVID19 #cruise https://t.co/D8V1RlKw9X
— James (Jim) Walker (@CruiseLaw) January 14, 2022

“Everything the cruise lines don’t want you to know” is the motto of this award winning maritime law blog authored by Miami lawyer Jim Walker.  More…

Cruise ship accidents, injuries, crimes, disappearances, fires, and collisions on the high seas involve issues of maritime law.  Jim Walker graduated from law school in 1983 and has been handling maritime law cases for the past thirty-five years. He handles a wide variety of cases from serious injuries to the highest profile sexual assault and cruise crime cases.